To catch you up on the chicken saga…After waiting for my much-anticipated chickens and receiving the crushing news that there would be a two- or three-week delay in the delivery of my chickens, I giddily came up with a Plan B: I would get baby chicks from the local Amish market!

Plan B had two distinct advantages aside from the obvious advantage of instant gratification. One, I would get a chance to bond with the chicks from a very early age, getting them accustomed to my voice, hands and constant companions, two yappy little dogs, as they grew into their full chicken-hood. Two, I could get them settled into their new home before I was distracted with a period of enforced quiet due to personal circumstances.

I found three wonderful little chicks at the market and subsequently asked the Omlet people to hold off on sending any other chickens until I gave the word that I was prepared–perhaps even as late as early spring. “A-okay” was the word from them.

Apparently, they forgot to pass the word along to the hatchery. 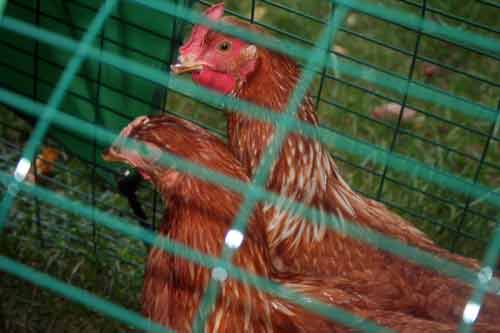 Yesterday, I received a surprise phone call from the local post office that I had some chickens waiting for pickup. What? I didn’t ask for any chickens right now!

To add to the surprise, I did not receive three white leghorn chickens that the Omlet people assured me would be just right for me, but three very large brown chickens that I believe are chestnut rangers. 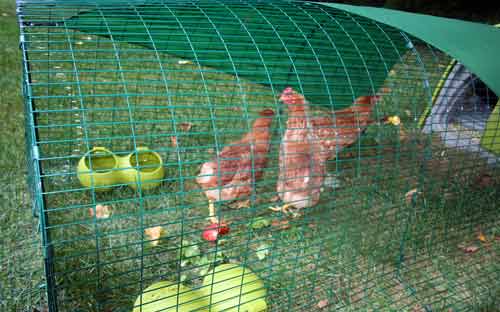 These three ladies arrived full of attitude. These were not the cute little chicks that I had grown accustomed to in the past three weeks. These are chickens. Nearly full-grown BIG chickens. They look ready to start laying eggs any minute now!

After I pried them out of their box, they had many chicken stories to tell of their travels. Mostly, they wanted lunch.

The poor babies Minnie Ruth and Olivia, who I was not able to catch prior to releasing the three new hens due to the configuration of the chicken run, quickly retreated to a corner where I was able to capture them. They are back in their playpen for now where they wouldn’t be pecked to death.

Now, you may be wondering, what am I going to do with three big chickens and two baby chicks? Answer: I don’t know.

You may also be wondering what I am going to name the new chickens since two of the three names I had previously chosen are now in use? Answer: I don’t know. I suspect one will be named Maxine 2 or Too Maxine or some much in memory of my lost Polish chick.

My husband and son seem enamored of the idea of naming one of the chickens for Brett Favre or Aaron Rodgers. Silly men. That won’t happen. 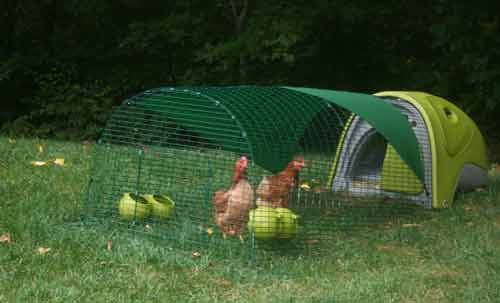 In the meantime, we are just settling in for a good heavy rain and a big blow. The chickens put themselves to bed early in anticipation of the storm–even before the clouds started rolling up. I managed to entice them outside with some plump tomatoes and lettuce for a quick photo shoot. They are now looking warily at the sky as they have their evening salads.

And so the chicken saga continues…