Because you were likely longing for more chicken stories…

..I will humor you with just a few. 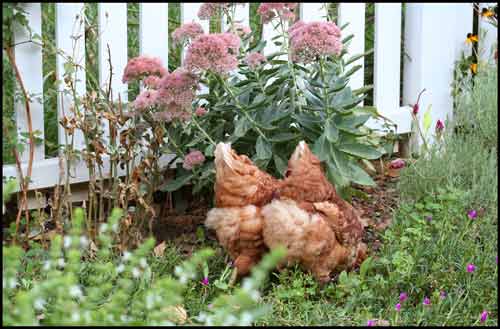 Maxine, Maude and Myrtle make me laugh. Not only are their jerky motions and startled reactions at the smallest thing humorous, I particularly find their noises amusing. The sound they make most often sounds like a little old lady worrying “Ooooh, noooooooooo.” They go “Awwwwwwwwwhhhhhhh” and manage to sound so very worried the way they draw it out. All three will get into the act and it sounds like maybe they ran out of pudding at the old folks’ home cafeteria. “Awwwwwwwwwhhhhh.”

In the evenings, about an hour or two before sunset, I let the chickens out of their run for a little walkabout. They usually just wander along the edges or the woods or into the garden scratching and looking for bugs. As the sun sets, they wander back to their Eglu and put themselves to bed. 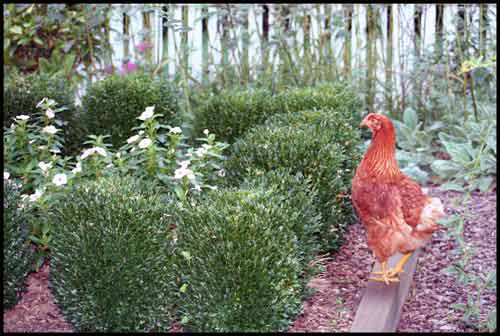 Did you know chickens love peaches? They don’t much care for bananas. And lettuce probably seems too much like grass. They also like cantaloupe.

“What about those chicks?” you ask.

Well, they are growing and growing. I can’t say they’re the most beautiful specimens. Minnie Ruth is, well, rather beaky. Olive (formerly Olivia) is looking just ratty. I have inspected for mites and bugs but don’t see any. I may treat them just to be on the safe side. 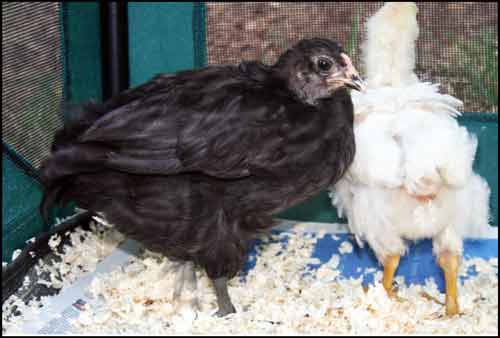 So there you have it…more chicken stories.

What’s going on with the garden? Well, lettuce and broccoli are planted. Spinach goes in soon in a coldframe. I have a lot of weeding to do as well as some tidy-up for the fall.

In which the chickens show their gratitude by laying eggs…

These extraordinary chickens just arrived on our doorstep on Thursday and already they have gifted me with not one, but TWO eggs! 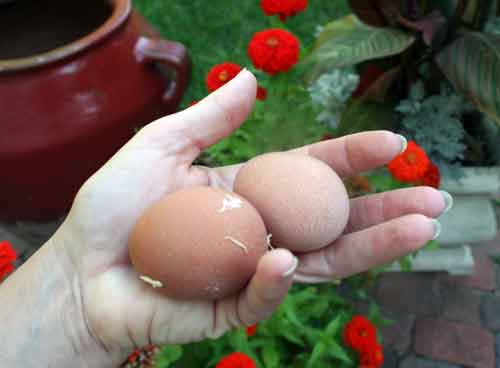 Now what should I do with them? I know I have to save them for Harry and Ben to see before I make any decisions, but then after that?

I’m thinking that I should just eat them simply, as scrambled eggs for breakfast. But what if Harry and Ben want some? No. Harry doesn’t even like eggs unless they’re cooked into something. Ben will probably be disgusted because he has seen the chickens poop.

Yeah, that’s it. They won’t want any eggs anyway.

Besides, I’ll just tell them the chickens meant the eggs for me. After all, I’m the one who has been sitting in the red chicken chair keeping them company and telling them about their new family. 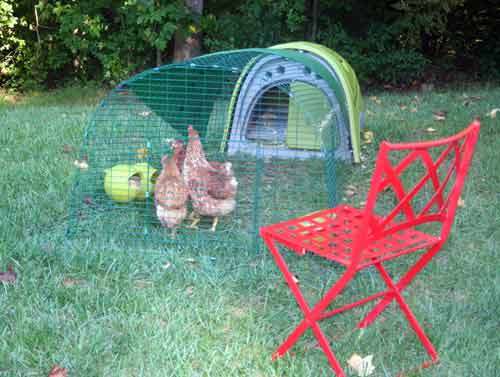 Of course, that begs the question of the third egg. There are three chickens and there were only two eggs. One chicken must be holding out on me. Where is the third egg?

And who is the slacker?