Try this at Home: Copycat Gardening

For me, there’s nothing like seeing the real thing to learn about plants.

That’s one of the reasons I make visiting botanical gardens, parks and flower shows a high priority when it comes to travel and my free time. Aside from the enjoyment of being outdoors or seeing all the wonderful new combinations, I can see the three-dimensional version of the plants in a natural setting. I can see their real size and color. I can smell, touch and feel the plant.

When I look at the flowers and plants in magazines and catalogs all seem to run together after a while. The photographers make them all just lovely. And how can you really judge color or size in print? Forget about smell.

When I’m visiting a park or garden I will sometimes photograph a particularly striking arrangement with the plan for making a similar arrangement at home or just to add to my photographic idea book.

Here’s an example. On the left is a container arrangement I saw at the Dixon House and Gardens in Memphis last May. I was particularly taken by the holly, primroses and parsley packed into the beautiful pot. The unusual shape of the holly made a dramatic statement in the container arrangement and added some vertical interest. 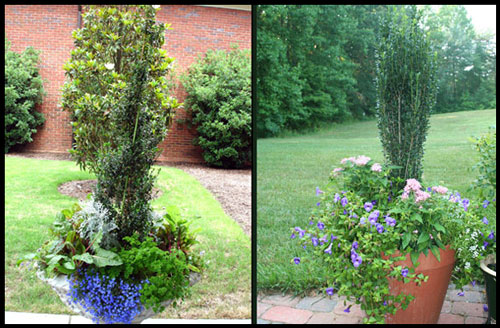 On the right is a version of the same arrangement I made at home with flowers I found at the local garden center, including a sky pencil holly and some miniature petunias. I didn’t have the fabulous container they had at the Dixon gardens, so a simple terra cotta container had to do.

Could I have gotten such an arrangement idea from a book? Sure. But by actually seeing and copying an existing arrangement, I had a much better idea of the outcome to expect.

I haven’t had nearly the same success with packages of plants sold to create specific effects. White Flower Farm has some spectacular arrangement collections and photographs that make me salivate. They are drop-dead gorgeous. Still, I’m not buying them anymore though because I can never recreate the same effect in my garden. It’s frustrating to spend a lot of money on plants and then be disappointed in the outcome. I’ll save my money for seeds, fabulous pots and plants I can be confident will do well here at Bumblebee.

Of course, not all of the arrangements here at Bumblebee are copies. But I think copycat gardening is a good strategy for learning about plants until you’re ready to fly solo.

If I Were Lisa Marie (off topic)

I have posted a number of new photos of my recent visit to Graceland in my photo album. But I want to offer a few observations to go along with the obvious voyeurism of these pix.

To this day, Lisa Marie still own Graceland. She long ago sold off everything else from her father’s estate to support the lifestyle to which she has become accustomed. But she has held on to Graceland. I presume that it serves three functions: 1) As a source of continuing income to support the aforementioned lifestyle and 2) to honor her dear old pops and 3) to fend off public criticism for selling off Graceland.

If I were Lisa Marie (which I clearly am not) I would do several things regarding Graceland and the memory of my dear, departed father.

1) If I were Lisa Marie, I would raise the overall level of the current Graceland tour from a National Enquirer-like spectacle of a dead, drug-obsessed superstar to the level of a National Historic Monument to a legend.

We might forgive Lisa Marie (just a little bit) for her inability to see the fine distinction between these two. After all, she grew up as a girl and lived her adult life as a subject of the National Enquirer. She had a birthday party with her little girl friends on an AIRPLANE named after her during a time when NO ONE but the elite flew anywhere. Her daddy flew her to Colorado to play in the snow FOR A FEW MINUTES when he realized that she had never seen the stuff. She has been married to some exceedingly questionable characters.

Given this type of history, she might not understand that there is a better, more refined way of doing things.

For example, she could re-orient the whole tour from a voyeuristic glimpse into Elvis’s private life into the story of his contribution to rock and roll. Oh, I understand that she needs to make a buck to pay for her own extravagant lifestyle and that the voyeuristic tour SELLS. But I think there is a continuum and she has slid so far to the end that she could afford to slip back a bit toward the middle.

She could actually PLAY SOME OF HIS MUSIC throughout the tour. Aha! What a concept!!!!

She could talk about some of the major MUSICAL events that occurred while he was living at Graceland. Or the host of MUSICAL SUPERSTARS who joined him in the various and sundry rooms in his home. She could overall put his life into context of his contribution to music. Not just tell the story of a man who lived in a house.

2) Along the same vein, she could spruce the place up a bit. If I were Lisa Marie, the first thing I would do would be to hire a proper lawn service. The grass looks unkempt and the poor excuses for flowers in the beds look like something even the local high school key club would not claim credit for. Even if Elvis didn’t splurge on the flora during his lifetime, Lisa Marie could at least do that now in his memory.

I would also upgrade the signs. The local 7-11 has better quality signs than Graceland. The ones they have are digitally produced on foamcore. It reeks of cheap, cheap, cheap. It’s like she went to the Wal-Mart Sign Shoppe.

3) If I were Lisa Marie, I would not ignore or disregard the hard lessons of my father’s death. I would acknowledge that he was sensitive, troubled and needed help he did not get. I would implore the Graceland visitors to not let the drug problems and mental deterioration that happened to my dear old dad happen to the people they love. I believe this can be done in an exceedingly sensitive manner.

At the end of the tour I would have people donate to an Elvis Presley Musician’s Drug Rehab/Rescue program. (We need a catchy name.)

4) Finally, if I were Lisa Marie, I would stop dating, and especially marrying, creeps and losers. I mean, really. Who marries both Michael Jackson AND Nicholas Cage? Lisa Marie needs her own personal intervention program.

For what it’s worth. That’s what I would do if I were Lisa Marie.