Mother Nature has sorely tried our patience around here in the past couple of months.

First there was the earthquake that sent me darting out the front door with the little dogs in my wake for fear that the computer cabinet was going to topple right onto my lap. Then there were tornadoes raging around in the vicinity to get us all warmed up for Hurricane Irene.

Oh, Irene! Irene dumped rain, tore up the roof and knocked down trees and generally made everyone but the dogs miserable. (The little dogs were sedated and slept through the whole thing.) Of course, the power went out, which meant our basement sump pump stopped working. Harry tried bailing water for a while until it became apparent that we needed nine or ten Harrys in a water brigade to stop the water from rushing in and filling in the basement like a very large, but very ugly, indoor swimming pool. After a while we quietly closed the basement door and tried very hard not to think about what was going on beneath our feet.

Once the subterranean waters receded I was hot on the phone with Thomas, our plumber, to get a battery backup sump pump installed tout de suite! Good thing too, because Mother Nature wasn’t done with us yet. We had another four or five days of rain dumping yet another 15 inches or so on our already saturated ground. And yes, BGE kindly made sure the power went out again so that we could test the newly installed sump pump. Bravo! It worked!

Well, now we get to the part about the farm truck, Lulabelle.

Waiting on pins and needles, were you?

Throughout the various and sundry tests on my patience I was grateful that I had resisted the urge to have the hideously large and ugly Lulabelle hauled away for scrap metal. See, last winter she had left me high and dry not once but TWICE in some very cold weather, necessitating that I wait for AAA for a combined total of three hours without benefit of heat. As you can imagine, this truck was not high on my favorite vehicles list.

But she has recently made up for her earlier transgressions by being quite handy at serving first as a mobile dumpster as we sorted through the soggy remains of the basement and then hauling everything away. (Okay, she didn’t do it herself, Harry drove her. But you get the idea.)

Now, Lulabelle is performing a function that requires a great deal of patience but does allow her to use her considerable weight to advantage. Lulabelle is now a tree stake. 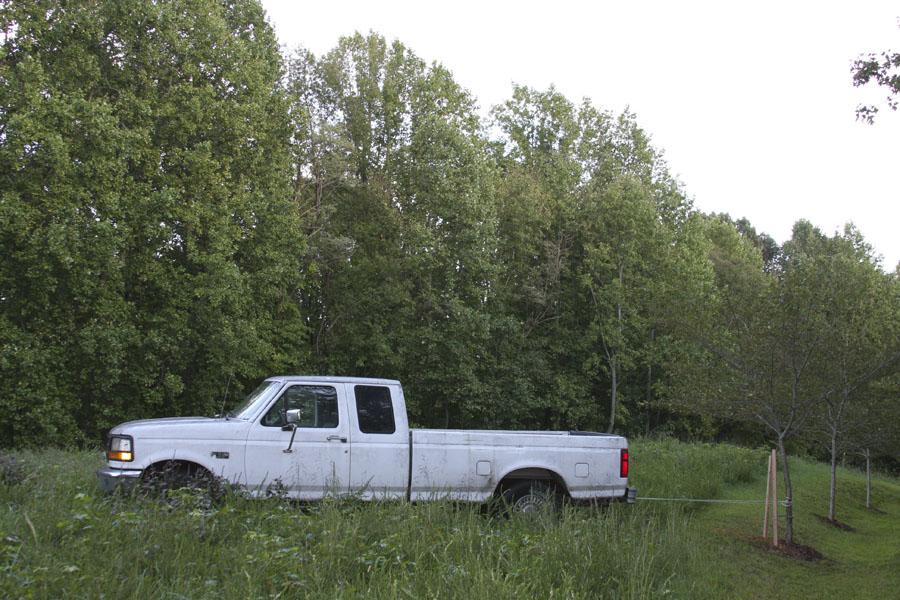 Yes, a tree stake. We lost three of the ‘Winter King’ Hawthorns by the driveway. Harry managed to upright another that was listing to the south. This particular tree was also bent in a southerly direction but resisted attempts to be righted by a mere wooden stake. So Lulabelle has been pressed into service.

Okay, I won’t give you all 101 uses for a farm truck, but I did think you would like to know that a farm truck isn’t just for joy riding.

Posted In: Gardening, Nature and Wildlife