Feathers and fur in the garden

Due to my down time in the fall, I have been far behind on my spring gardening activities. That means that I don’t have loads of beautiful garden photos to show off right now, though rest assured things are greening up and growing nicely. The spring rains have even helped me do some springtime lawn seeding.

What I can do is report on the animal front. You were worried about my chickens, right?

T. Boone Chickens has made an amazing recovery from the fateful attack that led to the loss of our beloved Johnny Cash.

But you know how some people are improved by the trials, tribulations and crises that life throws at them? They develop a sense of calmness, serenity and patience? Love for their fellow beings?

Well, if chickens are the same way, T. Boone isn’t one of them. Although he has survived and is thriving, his temperament was not improved by the near-death experience.

Now that Johnny Cash, the former top rooster, is gone, T. Boone has the opportunity to indulge in his full roosterness. Sadly, he is not a gentle lover. In fact, he’s downright mean to my poor little hens. When Johnny was their lover, he was at least gentle with his attentions. T. Boone is clumsy, rough and—how can I say this?—not a particularly good aim. 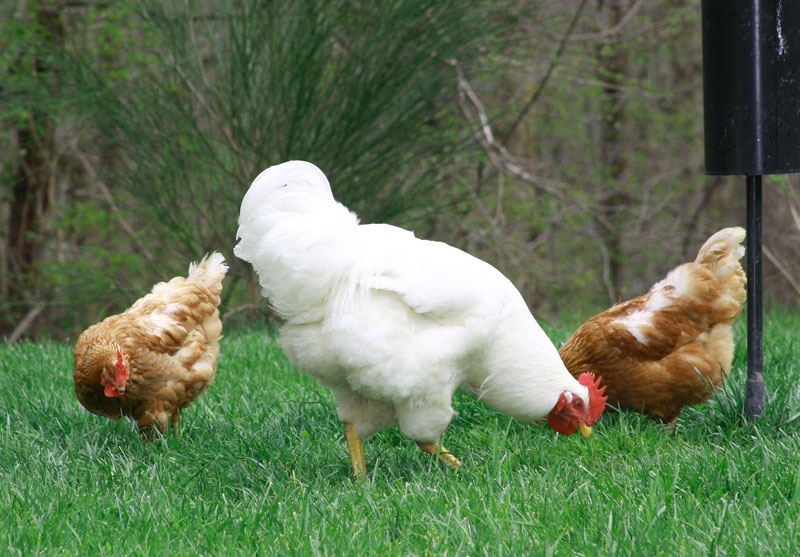 T. Boone’s clumsy attentions to the hens have left them a bit ruffled–feather tufts here and there.

The hens have to tolerate him, of course, but they are very put out by his attentions. And although he does seem to stand guard over them when they are out of their run and walking about the garden, he does a ridiculous stomping tantrum if one of the hens dares to get to close to one of the little treats he finds in the yard. Stomp, stomp, stomp, stomp, stomp with those big chicken feet, like a toddler who hasn’t gotten his way.

I do worry about the new hens who have arrived here at Bumblebee. How will they ever deal with this brute?

Four young girls—two Black Starters and two White Leghorns—arrived a couple of weeks ago. We are keeping them separated and allowing them some supervised and separated meet-and-greet time for now. In a few days we’ll allow them out of their runs together to get an even better up-close look. 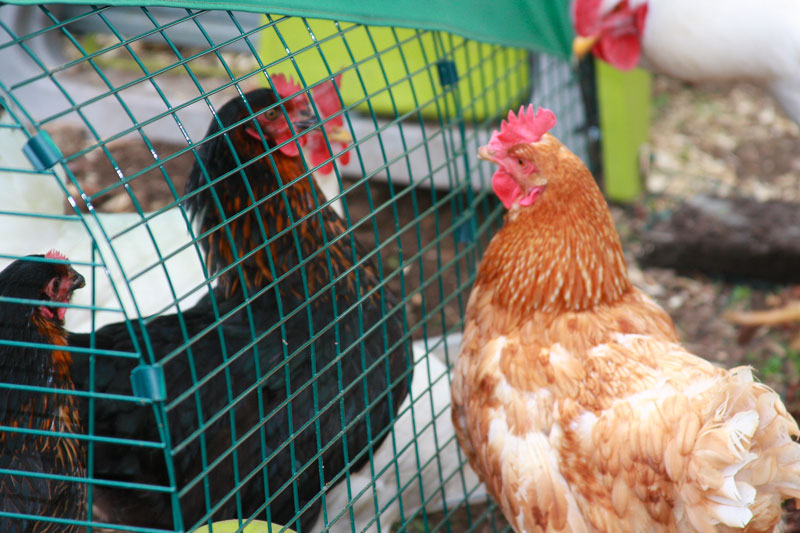 Maude greets one of the four new hens.

(By the way, send me your egg-intensive recipes. We’re getting six eggs/day and there are only three of us. When Ben heads off to The Citadel in August, Harry and I will have to deal with half a dozen eggs/day by ourselves.)

With all this talk about chickens, I suppose you’re wondering if I’m still a gardener. Yes, indeed.

In fact, I was working on doing some planting this past weekend and what should I find? Well, look here… 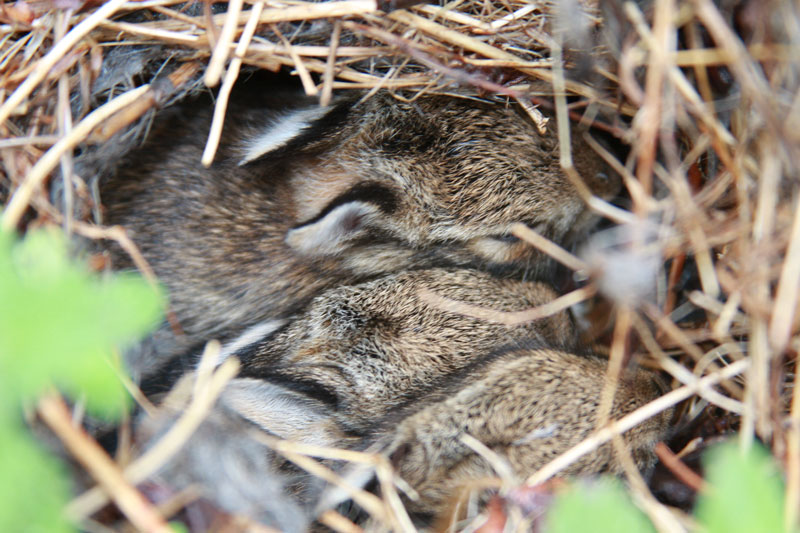 A nest of baby bunnies in the garden–right next to the lettuce patch.

Yep, a nest of baby bunnies. And the mom bunny very cleverly located them right next to our lettuce patch. Just a short walk to the salad bar!

I have touched the nest and talked to the babies about having mom relocate them. But she seems happy with their current digs next to my lettuce. So be it.

Harry, of course, is devastated, what with lettuce being his favorite food and all.

And so it goes here at Bumblebee…