Summer has passed and we are well into the fall season and I’m just saying hello. I have been on sabbatical. I might go back on sabbatical after I write this. There are no promises implied by this post!

As I write, the chickadees are having a bird war outside my window. Something has them in a tizzy and they sound as if they plan to fight to the death.

This was a summer of bird wars. Bluebird wars, with three or four male birds in a shouting match and hopping from tree to tree for emphasis. Cardinal wars, the vivid red birds sweeping low across the lawn chasing after each other. Wrens duking it out with little clawed feet.

It’s the males that seem to go at each other with such purpose, although the females are not above throwing a punch in a good scrap. 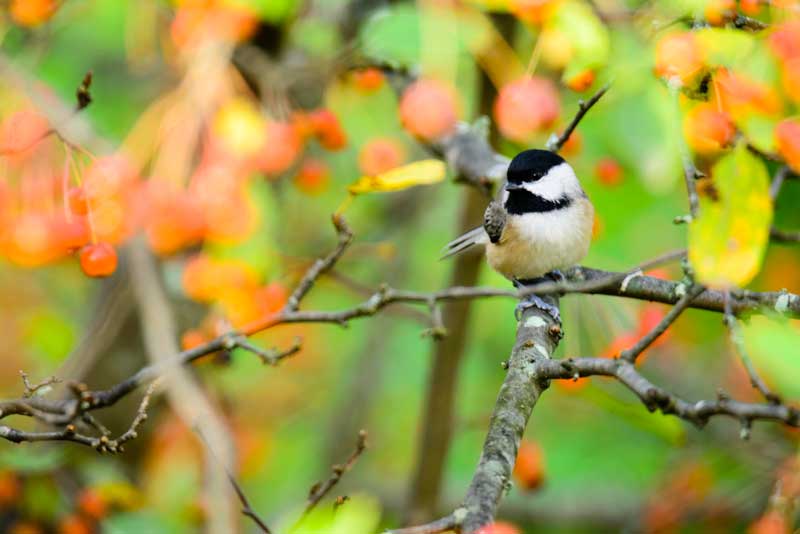 It’s probably not a fight over food, because there are bugs in abundance. In August the cricket and grasshopper populations seemed on the brink of some sort of coup. They lifted up in great swarms ahead of me as I rode my mower over the lawn.

Even now, in October, the crickets huddle outside the doors and decide to send a forward scout into my house to check out the possibilities inside the walls. I am about to drift off to sleep and the chosen emissary will begin his crickety screech. My eyes shoot open. My arm and leg muscles bunch up in fight response. I silently slide out of my warm bed in search of the offender. He quietly slinks into hiding. I stand like a statue in the dark, trying to fool an insect. He falls for my trick. I pounce. But he is faster and practiced at these games. He eludes me. We continue the game of pounce and hide in the dark until I surrender, return to bed and turn up the fan to drown out his noise. I drift off to sleep, vowing to murder him in the morning. But when morning comes he is nowhere to be found. He has gone to sleep after a long, hard night of our game.

Walking with Sarah in the garden I spy two golden orbs in the crotch of a zelkova tree. An industrious squirrel has tucked two hickory nuts away for a later snack. I keep an eye on them over the next few days. One disappears. The remaining nut must be part of the squirrel’s long-term plan because it is still there. 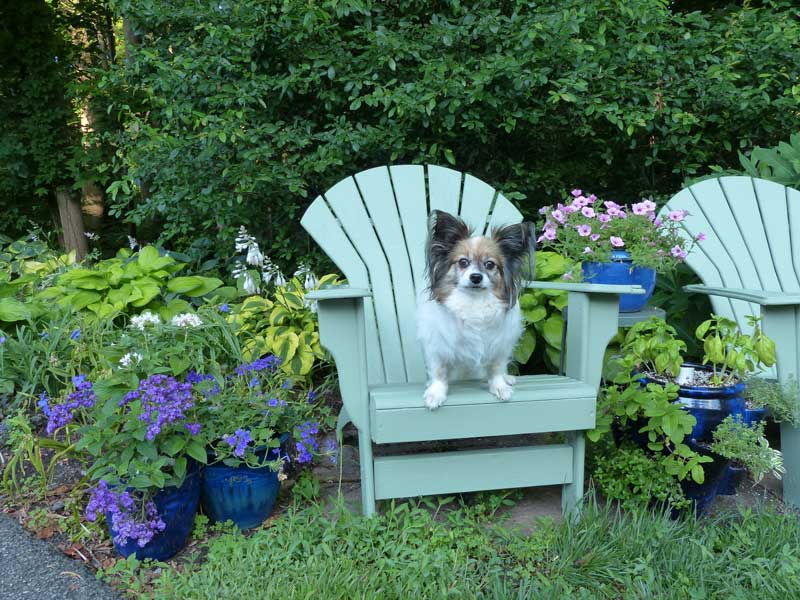 The turkeys are growing up. It is a grand turkey year, perhaps because we have a bounteous cricket supply for them to feast on. Four or five mom turkeys are raising their families together, so we often see forty or fifty turkeys at a time making their way across our cricket-infested lawn. I try not to frighten them away as I strain to get a better look. These turkeys are very skittish. You must be very still or they will scamper away into the woods surrounding the house. Sometimes I don’t see them but can hear them gobbling in the woods.

For years my husband has proclaimed moss envy whenever we hike at the local American Chestnut Land Trust. Several years ago while my son was home from college he hauled 13 tons of stone dust into an area we cleared in the woods. It has taken these years for the moss to become established. Last summer I read that walking on the moss was an excellent way to spread the spores. I spent time every day last summer meandering in circles around the little clearing, imagining the little spores sticking to the soles of my shoes and finding a new home a little ways away. It seems to have worked because we have significant improvement in moss cover this year.

Work and more work has kept me in the house this summer, so my moss meandering has not been as extensive. I hope to meander more next summer.

Speaking of moss, it has established nicely between the pavers on the back patio and front walk. Whenever I have the men out to wash the outside of the house I have to race to make sure they understand I don’t consider the moss a nuisance. There is something about a man with a power washer that makes everything look like it needs to be cleaned. They seem to think I am eccentric in liking the moss and the stained look of the concrete front stoop rather than a gleaming white concrete.

After years of mowing the back field I decided to let it grow during the summer. I mow sweeping swaths to create a path up and down the small hill, creating a pleasing effect. I’m considering moving the bottle tree from the moss garden to the top of the hill on one side. I mow the whole field just once, just before winter when I feel confident the eastern box turtles have gone into hibernation. Not too many things would make me feel as terrible as hurting a pokey little box turtle unfortunate enough to be wandering in the weeds when I take it in my head to mow. I am hyper vigilant when mowing the lawn to make sure none are in my path, just as I often pause to wait for bumblebees to move along so I don’t catch them up in the blades.

My sweet chickens moved to the neighbor’s house last summer and my garden tools moved from the garage to the coop. I’m happy to have the extra room in the garage so I don’t have to shimmy out of the narrow crack of my car door, but I miss spying glimpses of chickens pecking their way across the yard. Maybe that’s why the crickets are so numerous this year. No chickens to keep them in check.

I still haven’t tackled planting the old outdoor chicken run area. Two beautyberry bushes are duking it out now that they don’t have the chicken wire to keep them in check. The sweet autumn clematis doesn’t have the top of the run to crawl across, but it seemed content enough to climb the roof of the coop. I still don’t know what to do with this area. I have given it little thought as I sit inside pecking away to send emails and write reports.

Soon we will begin tearing out the remaining 15 winter king hawthorns on either side of the driveway near the house. After years of beautiful spring blooms and fall red berries, the trees are now diseased and no longer bear the flowers or berries. I will miss the annual visits from the cedar waxwings, which had the astonishing ability to arrive at the same week in February for many years running. 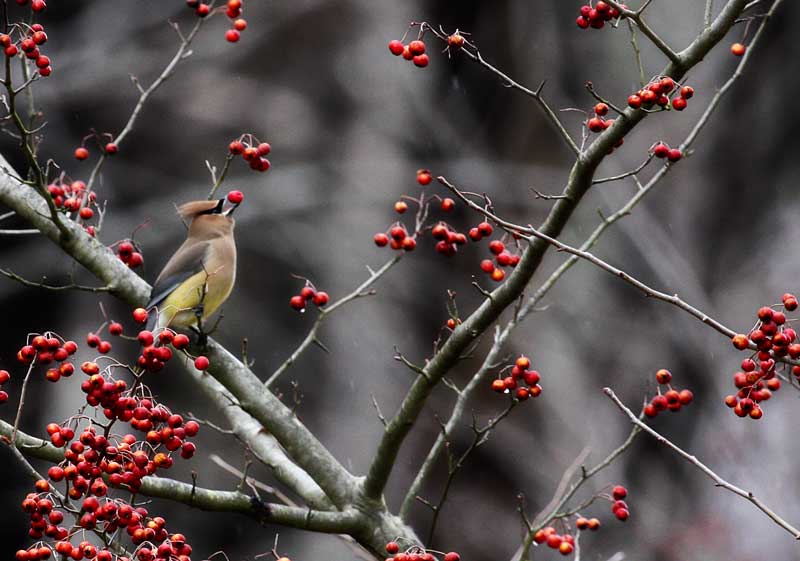 A couple of years ago I purchased a fountain on impulse while in Portland on a gardeners fling visit. It took months and months for it to arrive because it was custom cast and, apparently, the first cast was flawed. When it finally arrived I was horrified to see it lifted off a motorized carrier on a pallet. The 300 pound fountain was crated and packed with excelsior. In the days it took me to find a crew of men to move the fountain into place some corn snakes had taken up residence in the excelsior. The Mexican workers weren’t amused when they moved the straw-like material and snakes slithered out. I tipped them nicely and they have a story to tell at the dinner table. I run the fountain about six months out of the year and enjoy cracking the windows in my office on most days to hear the sound of the water as I work.

And now I hear the crows outside. I don’t know where they have been all summer. Maybe they decided to find a place closer to the water. I have missed their caws and intelligent way of guarding the perimeter of our hay field. I will enjoy having them back this winter. That is, until they begin to gobble up the seed I put out for the little birds. I wouldn’t mind, but crows are as greedy as they are smart. I must look out for the little guys.

The last time I posted here on Bumblebee was to let you know My Precious had died. I still desperately miss my little Sophie. Just last night I dreamed that I was in prison with her and a horrid jailer kicked her with his big ugly boot. I tore into him, pounding with my fists, screaming and crying. It was like hitting a wall. He threw us back into our cell. Sophie was still alive and we cuddled together in our cell. I’m not sure what these dreams say about me. Someone please write and let me know.

I have missed blogging, but am not sure how it fits into my life these days. And so, I toss this post into the digital void.