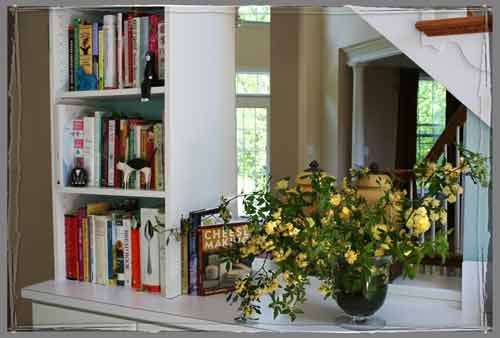 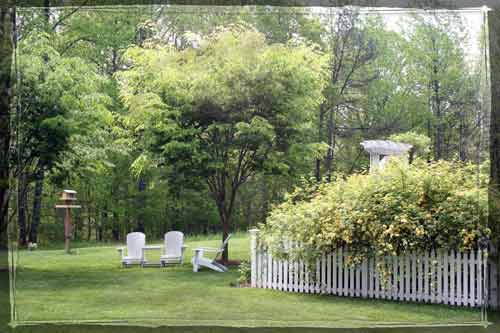 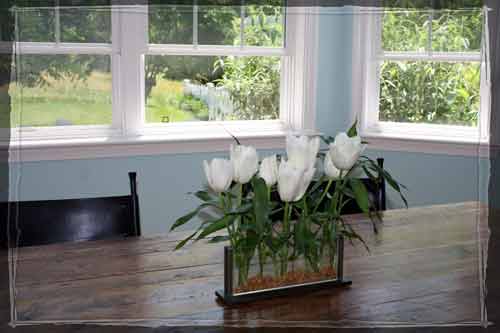 I used to be afraid to cut the flowers in my garden to bring indoors. It was a classic case of flower fear.

Other people, I have heard, experience the same phenomenon. It is the fear that if you cut the flowers in your garden, it will take away from the outdoor beauty. Who wants a bald, flower-free garden, right?

For me, the flower fear ran so deep that I would buy flowers every week, even in the summer, to use in the kitchen, family room, bedroom and bathrooms rather than cut the ones right outside my back door.

But I want my own fabulous flowers in the house, darn it. And I also want my garden filled with an abundance of flowers. In short, I WANT IT ALL!

Why can’t I have it all? Martha Stewart has it all. Oprah has it all. Heck, Angelina Jolie has it all. Angelina even has Brad Pitt! Heck, if she can have Brad Pitt, why can’t I at least have indoor/outdoor flowers? Is that asking too much? 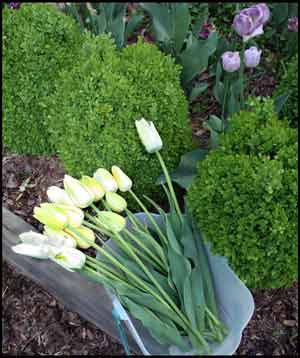 Last fall year I decided it face my flower fears.

I added my own little cutting beds so that I could give myself permission to invite some of them indoors. I stocked up on tulip bulbs. Red tulips, purple tulips, white tulips, pink tulips. Tulips, tulips, tulips. I think I must have been a bit single-minded the day I was stocking up on bulbs, because I came away with about six dozen tulip bulbs and very little of anything else.

If my selections lacked in imagination I can’t say that the execution was especially stellar either. I managed to get about half of the tulip bulbs planted in October before freezing rain and demanding clients drove me indoors. The unplanted tulip bulbs languished in a bucket in the garage. Every time I walked past the bucket to my car the little florist in my head would say, “You’re horrid! You’re killing the flowers. You’ll never have flowers in your house. You don’t deserve flowers in your house!”

The little florist in my head is mean. And sometimes she says bad words.

Finally, one warmish day in February I headed outside with the offending bucket of bulbs and dug them all in. I had no expectation that they would grow. After all, fall is the time to plant tulip bulbs, not February. But at least it shut that miserable little florist voice down for a while.

Amazing, but true, all of the tulip bulbs, including the February planted bulbs, grew and bloomed. And I’ve been cutting and cutting to keep the house tulip-filled for about a month now. I have another bunch of summer blooming flowers all planted and will be inviting them indoors as well.

I still don’t have Brad Pitt. And that miserable little florist in my head still nags at me about my arrangements. But I believe you can say I have recovered from my flower fears.