At the risk of flogging a dead horse (a hideous expression, don’t you think?)…

I want to make an appeal to those well-meaning but misguided folks who assemble the bouquets at our corner florist shops. And I especially appeal to the corporate creative department at FTD, which fuels and/or dictates much of the design aesthetics for these small business owners.

You know the people. They make things that look like this… 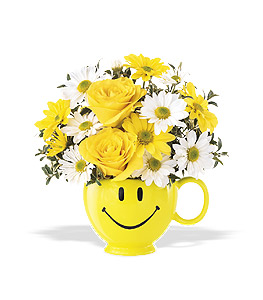 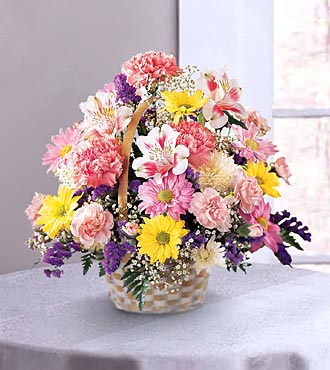 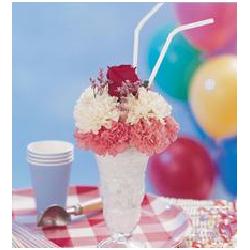 In the name of God, please STOP!

What you are doing is an abomination. It is a blasphemy against the laws of nature and how God intended plants to grow. Have you ever visited a garden? If so, did you EVER see all of these plants lined up uniformly in a symmetrical orb with no stems, leaves or branches–resembling a basketball? Must you reduce Baby’s Breath and ferns to an afterthought? And why must containers be so very sweet? Do we really need flower arrangements that look like ice cream sundaes? Carnations colored into fluorescent hues of green or orange? Teddy bears hugging our tulips?

Mr. or Ms. Florist, can you please pick up a couple of design magazines and see what is au courant? It’s not this tightly packed, overly-colorful, cheap flower arrangement that are the equivalent of the super-tight permanent wave cranked out at smelly “beauty parlors” in small towns in our fair land.

We have a local florist that my husband, until recently, faithfully visited for my birthday, anniversaries, Valentine’s Day and other important occasions, including when he was in the Dog Haus. I dropped by recently because they had a sign advertising a good deal on tulips. Frankly, I can only conclude that these people do not actually LIKE flowers.

As I entered, I had to pass all manner of “arrangements” that would make the average weekend gardener convulse. It was like entering a flower torture chamber. They were packed, crammed, twisted and contorted into every manner of unnatural pose imaginable. When I finally made it to the bargain tulips, I could hardly breath.

“Let me out of here. You’re hurting me!”

To be sure, the FTD folks seemed to have hired at least one younger-than-80 creative person. They now offer minimalist arrangements by Todd Oldham and Vera Wang. But, really. $110 for an orchid that I can buy at Lowe’s for $20? There is a way to go before you’re there, FTD.

Let me recommend a book for your education and edification. It’s called Zen Flowers, by Brenda Berkley and Anulka Kitamura. It is filled with examples of airy, simple and tasteful arrangements that honor the original plants and do not involve torture devices or demeaning containers. 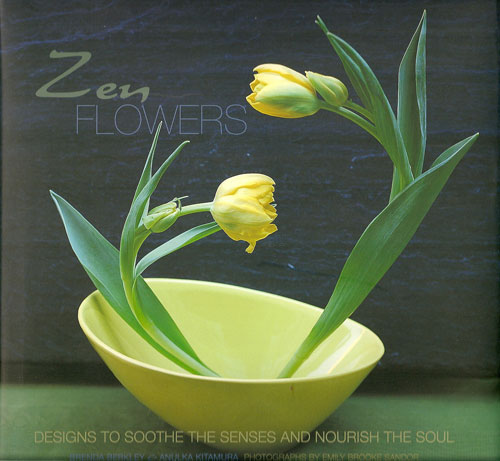 And guess what? The author actually owns–a FLOWER SHOP! And she makes a living selling designs such as this… 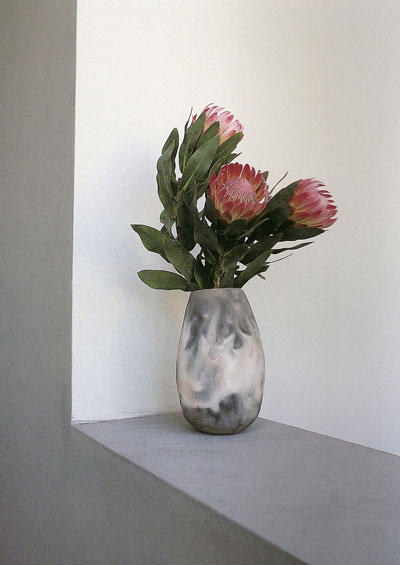 And imagine a home with flower that look like this… 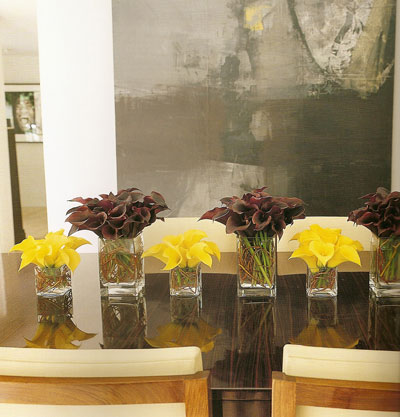 I know that Ikebana may not be for everyone. And I acknowledge the commenter from my previous post on the topic who said that there are some flower-buyers who expect quantity rather than quality. But I also believe that it is incumbent on florists to help educate their customers on nature and taste. Do you reall WANT to torture all those tulips? Pervert those petunias? Wrestle those roses?

But I am hoping that someday we can banish mounds of ice cream sundae flower arrangements or flowers in yellow smiley face cups. I hope that as gardeners we can help educate our friends and families that a simple arrangement in a humble, but natural container, is more aesthetically pleasing than a tacky ceramic container made in China. I would prefer some spring daffodils in a recyclable aluminum can to the overly-wrought arrangements that contort and distort nature.

(Okay, I acknowledge that I seem to be a wee bit cranky right now. Mi dispiace. I seem to be time-stressed, which is completely contrary to my continuous improvement efforts to simplify and slow down. That said, in the way of excuses, I have a lot of travel ahead in April–my prime gardening month. I am heading to Austin for the garden bloggers Spring Fling after which I head directly to San Francisco for some focus groups. I land home for barely a week before heading off to Geneva, Switzerland, for more focus groups. I know…sounds great until you contemplate my client’s coach-fare policy and the fact that my garden needs some serious remedial work in April. Oh, quit it with your tiny little violins…I’m serious here. This time.) 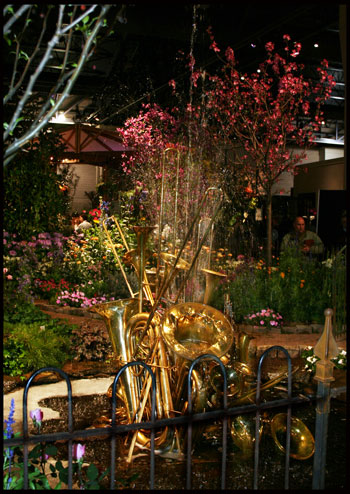 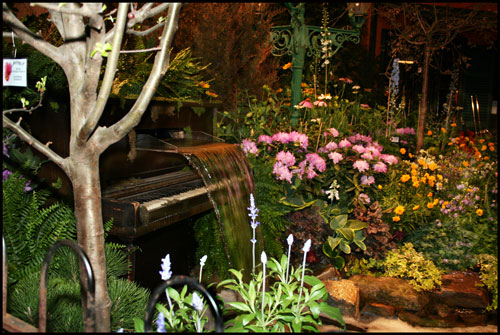 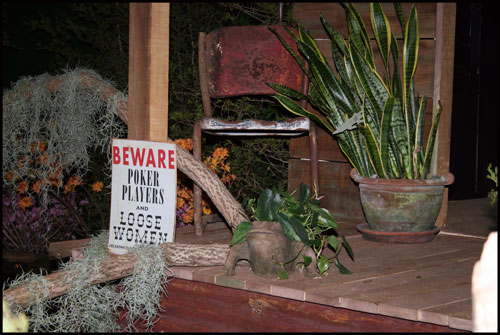 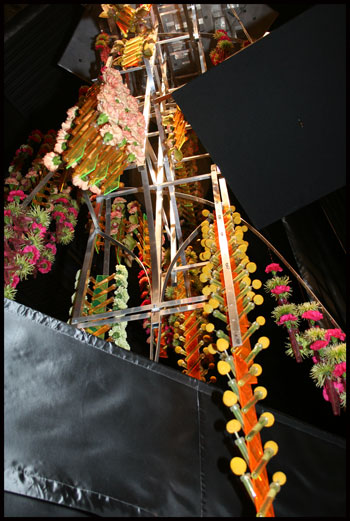 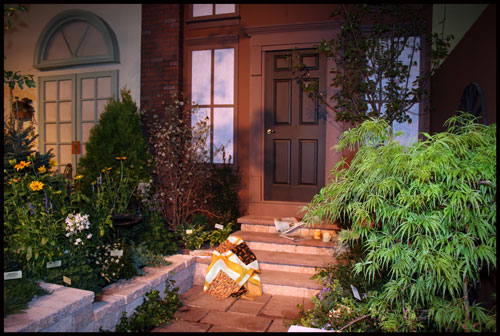 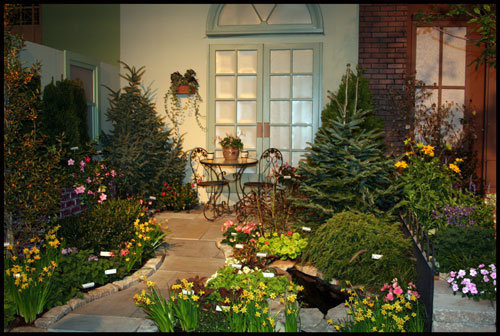 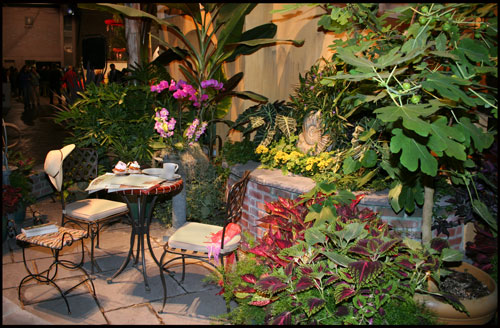