I know y’all are probably scratching your heads trying to think up the best gift ideas for your loved ones this Christmas.

So to inspire you I thought I would share a few of the cherished gifts my little brother and I have given each other over the past two or three years.

First things first. Here’s my little brother Dale. I always think of him as my “little brother” although at 6’3 he’s not so little anymore.

In case you can’t see it, Dale’s t-shirt says “My Indian Name is Runs with Beer.” This says a lot about my brother. Dale cracks me up. Some days we’ll trade numerous emails (no IM for me—too intrusive), having little conversations about some news item, what’s happening in our lives, gossiping about a relative, as there is a LOT of material with our family fruit tree. The guys here in the house always know I’m trading emails with Dale when I start laughing hysterically while sitting at my desk. Not a lot funny usually happens in marketing research, so they know it’s not work related.

When we were kids, our family called my little brother “Dale Dale” cause the Kennedys called their favorite son “John John.” In return, my brother and dad called me “Ra.” Don’t ask me why. Aside from a brief stint as a “Cleo” in Girl Scouts because of an ill-advised hairdo and a Boyfriend-Who-Shall-Not-Be-Named who called me Robbie, I haven’t had any other nicknames. I don’t think I am generally the kind of person who inspires nicknames. Someday I need to research the reasons for that.

Our whole gift-giving competition started a couple of years ago when something inspired Dale to send me this silver bowl of coal from that fancy schmancy, overpriced gift catalog Red Envelope.

Dale doesn’t normally go for the type of marketing hype that catalog specializes in, but something about a bowl of coal packaged with a flowery explanation assuring the lucky recipient that it was air purifying, positive karma tradition of some far-off land that made him think “Wow, that’s just the thing for Robin!” The fact that it was a bowl of coal at Christmas was a subtle message. But, hey, I’m smart. I got it right away.

That made me think. What would a clever fellow like Dale really love (okay, deserve) for Christmas?

Then one day, after surfing the Internet for about, oh, about six hours I just happened to stumble across these embarrassingly gross taxidermy frogs. What says “I love you” more than a taxidermy frog? TWO taxidermy frogs!! See, he loved them so much he put them on display in his home office. 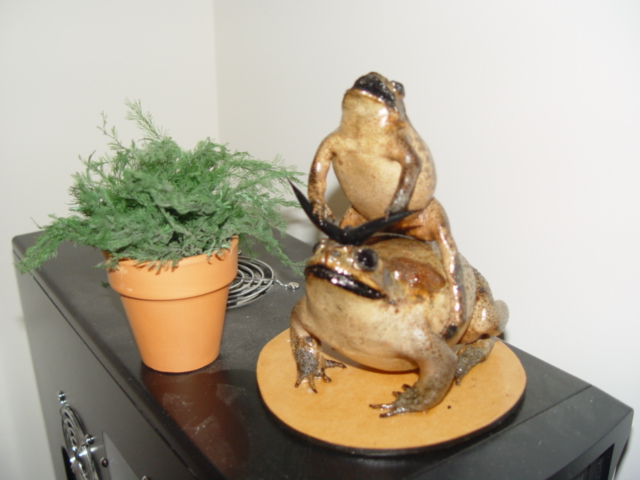 I figured I was on a roll, so for his birthday I decided to help him with his garden décor. This little troll picking his nose sure did remind me of my little snot-nosed brother!

Dale was pretty much feeling the heat by now. So one day, he gleefully emailed months in advance of Christmas that he had found the perfect gift for me. He made sure that I had Harry lined up to take a photo of me opening the package since he couldn’t be here to present the treasure in person.

Inside was “knife man.”

Very funny. Have you noticed that Dale’s gifts are a bit insulting? Coal. Knives. Humm. Is there a message here?

What should I do for Christmas this year?

I found a great t-shirt with an Amish guy on it that says “Don’t Drink OR Drive.” That seems too easy. I also found a gun that makes all sorts of body sounds—farts, belches and such, but I think he’s seen those.

I’m putting on my thinking cap. Let me know if you have any great ideas. I need to make this a memorable Christmas for my little bro. He deserves it.

Occasionally I’ll look back through how people arrived here at Bumblebee Blog.

Apparently, I have inadvertently been luring unwitting Googlers here who were searching for things about bumblebees since a great number of the Google search words are just Bumblebee or Bumble Bee. I have a hard time believing that all these folks heard about Bumblebee Blog from their pals and rushed to Google to find out what all the excitement was about. It makes me think that perhaps I should actually write something about bumblebees sometime soon so they aren’t all disappointed when they land here.

A while back, I had dozens and dozens of people arriving here via a website that linked directly to the story about my visit to Graceland. When I tracked it down, it was some fellow’s website in Greek! I couldn’t find the reference to me or to Graceland and am still baffled why a bunch of Greek-reading Googlers would want to read about my visit to the home of The King. Perhaps it was my fake photo gazing adoringly at Elvis. I like to think that perhaps I have an uncanny resemblance to some Greek movie star or supermodel and that all these folks were checking me out. In reality, I probably look like someone’s cousin or something.

Some of the Google searches and the stories they find actually make sense, such as my blog post on the miracle plant food challenge where I compared SuperThrive and Miracle Gro plant foods.

Quite a lot of people find my story about the ugly parts of my garden by searching on images for sky pencil holly. There are so many those hits that one time I did the same search. It’s no wonder they link here. My sky pencil holly arrangement really does showcase the plant better than the other photos on the Google search. Nanna nanna booboo.

Some of the Google search strings are just plain funny, such as the person searching for “November 2007 Weird Events” that took them to my guest blogger Sophie’s story about my inadvertently picking up a hitchhiker. I wonder what kind of weird events that person was searching for? UFOs? Darwin Award material?

By the way, that story also contained a rather lengthy list of things for me to do that weekend. Someone else found that story the same way by searching “Mom ToDo List.” WHAT? They don’t have enough things on their own list, they need to search for someone else’s?

In an ironic twist, I seem to be attracting bunches and bunches of knitters who Google such phrases as “how to monogram knitting,” “Italian knitting needles” and “$100 knitting needles” and—get this—“knitting mushrooms.” These folks landed on the story about my misadventures trying to learn to knit—and how I re-purposed my knitting needles to prop up the humidity tent on my new mushroom patch. Imaging getting all these eager knitters when I am a knitting moron. Hehe.

Two people, one searching “Christmas hair highlights,” and another searching “blond man hair” found the story about my otherwise uber-masculine brother-in-law’s preoccupation with his hair style. I am QUITE sure that Captain and his “man bag” is not what they had in mind.

Then one guy Googled “little girl tongue.” I don’t even want to THINK about what he was looking for. What he found was a photo of my little dog Sophie after a bath with her tongue sticking out. (It doesn’t fit all the way in her mouth.) Probably not what he had in mind. Serves him right. The creep.

Finally, I’m intrigued that so many people visit my photo album and linger over photos of my family. I posted them as a convenient place to share with my far-away relatives as well as to keep some of my favorites organized in one place. But people are apparently pretty interested in photos of us in Greece, sailing or hanging out in the yard. I read once that when burglars break into homes it is not uncommon for them to take time to peruse the photo albums that might be laying about. Perhaps it’s all part of the same curiosity about other people’s lives?

Now I’m wondering, what Google search strings have taken people to your blog? If you write a blog entry on the topic, let me know by, say, December 5, I’ll do a roundup with all the links. Should be good for a laugh or two, eh?