Nine Months in a Bumblebee Garden

As I work on the fall garden cleanup, I’m thinking back to the season in the garden. In March, the weather was still frigid and the trees were still bare. But before spring kicks in is actually an excellent time to take stock of the garden because the “bones”—the major structural outlines—of the garden are clearly visible.

Three years ago I had the white picket fence and arbor installed. Last year Walter, my handyman, installed the raised beds for me, hauling tons and tons of topsoil and leaf mulch in a wheel barrel. Although it was a very expensive project I believe it paid off by providing a formalized framework in which to work. Even though I’m not a gardening genius, things still manage to look reasonably tidy and professional even when I was not particularly tidy and professional about maintaining the garden. 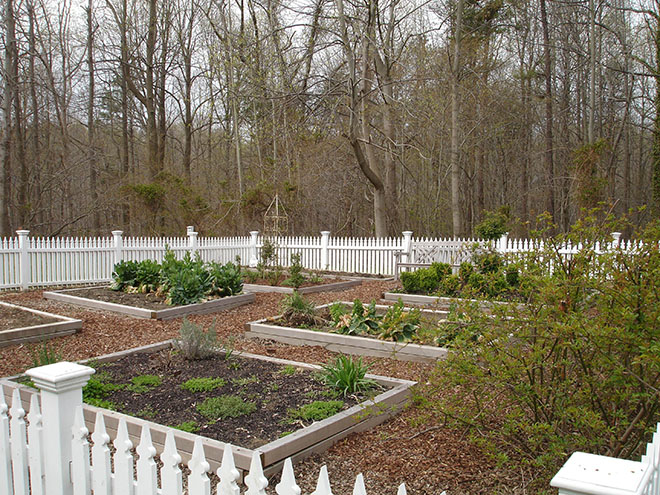 In previous years, I largely concentrated on growing herbs and vegetables because I love the fresh food and the kick I get out of growing something I can actually eat. Even when I was in my early 20s I found it gratifying to have some tomatoes and pole beans that I could pick for dinner—not to mention that since I worked at a non-profit at the time, I needed the cheap food.

But with a small family of three humans, we really don’t need all that much in the way of extensive planting to feed everyone pretty darn well. I usually don’t have a lot of time to devote to preserving and freezing, so I ended up giving most of the excess produce away to anyone who would take it—friends, the FedEx guy, the copy store lady, the wine shop guy. Anyone! I was my very own Meals on Wheels with the back of my SUV loaded with cucumbers, zucchini, Swiss chard and other veggies.

So last year I decided to cut back on the vegetables and add more color to the garden with perennials and annuals. The beds in the perimeter of the garden have a few veggies, but are mostly perennials, including peonies, lamb’s ear, ice plant, bee balm, lavender, irises and more. While the borders can be quite pretty, they aren’t particularly organized or cohesive—a result of my undisciplined practice of hauling home pretty much anything that strikes my fancy. (This winter’s plans include, well, coming up with an actual plan.) 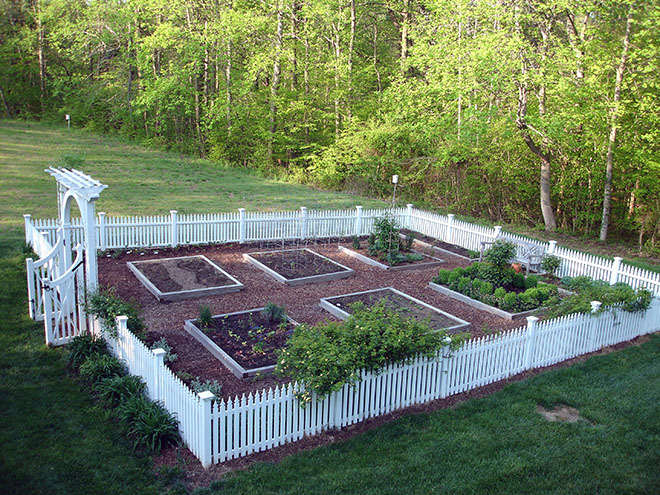 Not much that you can see was happening in May, although the garden had been cleaned up and planted with seedlings that I started in my indoor light garden—a three-tiered rolling stand that dominates my office. Going clockwise starting from the upper left are 1) peppers and cucumbers 2) tomatoes, parsley, marigolds 3) baby doll roses and a Henryi clematis 4) boxwoods surrounding the most hideous colored rose topiary ever sold to the general public 5) basil, bush beans, Swiss chard, spinach 6) rosemary, basil, oregano, garlic chives, chives, tarragon, hollyhocks, lavender, parsley and more herbs. 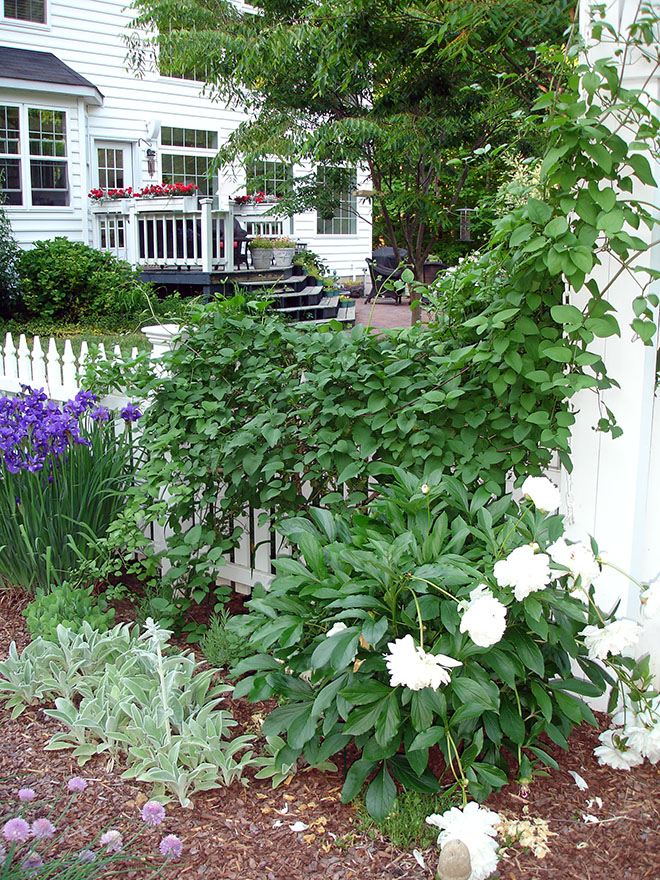 May is also the only month that I like the two Lady Banks climbing roses you can see dominating the fence. They bloom these tiny yellow roses and are magnificent, although without fragrance, for about three weeks. The rest of the year the roses are an absolute nuisance that must be hacked back to prevent it from dominating everything around it. 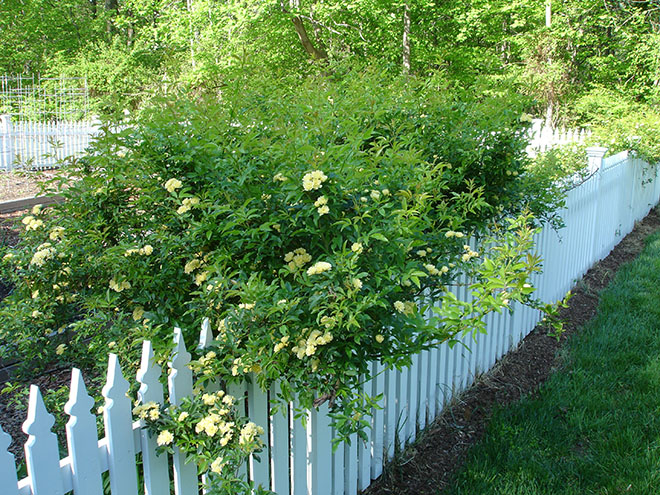 By June, things were starting to look pretty good, despite the drought that was already in full swing, as you can tell by the unsightly brown spots over the septic tank. Already I was spending nearly all my garden time communing with the water hose. One of the disadvantages of a garden with this type of layout is that you can’t just set up a sprinkler and walk away. It requires hand watering unless you’re okay with wasting water and encouraging weeds to grow in your mulch paths. I could also install a drip irrigation system—but not this summer.

You can see that the wisteria and clematis are starting to race their way to the top of the arbor over the gate from opposite sides. We had plenty of spinach, black seeded simpson and red sails lettuce to make everyone happy. The tomatoes were starting to grow, although the Texas tomato cages really aren’t needed at this point. 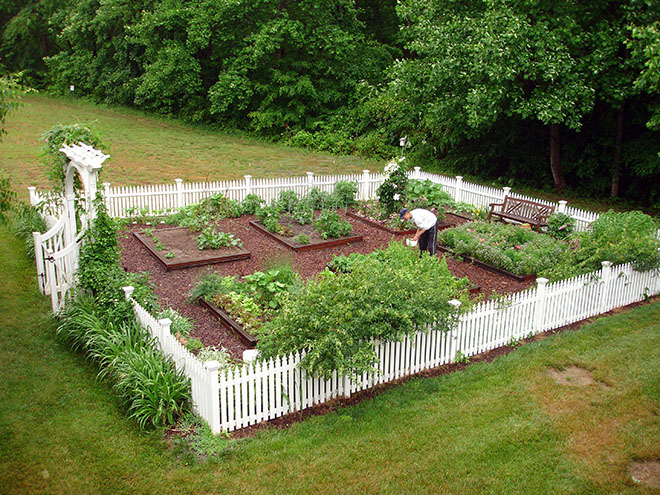 What a difference a month makes. The lettuce had bolted and the tomatoes had raced to the top of the 6′ tall Texas tomato cages. The daylilies just outside the fence were blooming beautifully. Lucia, a family friend, finally dug up the lurid rose topiary and carted it home with her. (I believe she might be color blind.) Now that the ugly rose was gone, I could actually sit for a few minutes on the bench without being offended–when I wasn’t hand watering, that is. The drought was in full force. 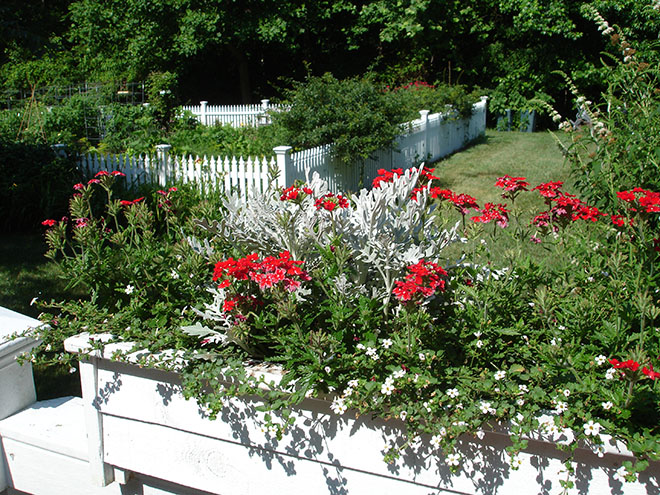 By August we had moved a container planted tree in to replace the lurid rose topiary. I hacked back the rampant roses so things were still looking fairly tidy. There still wasn’t as much color as I wanted. We had some beautiful cock’s comb, climbing black-eyed susans that you can see creeping out of the fence at the bottom. The marigolds around the tomatoes were stunning though. My baby doll roses have not done particularly well and I am thinking of replacing them with something less finicky. 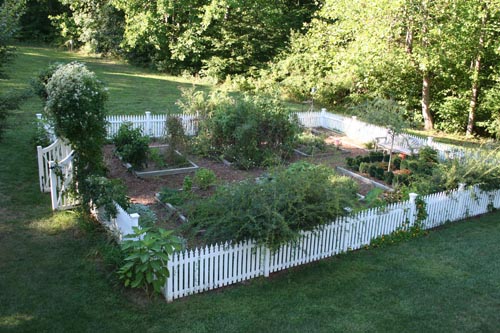 September was still very dry. All summer long we had less than 2 inches of rain and most of that was in a single week in August.

The clematis over the arbor was glorious. It really did seem to win out over the wisteria. The wisteria still needs to come down before things get ugly for that poor clematis.

Amazingly, we harvested tomatoes throughout the month of September and into November. 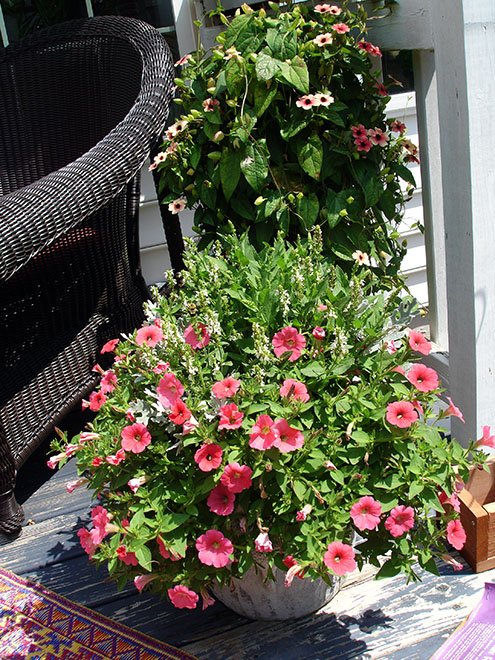 It’s November and those dang rose bushes continue to vie for world domination. Harry mowed the one on the right down about three years ago. Yes, he ran over it and cut it ALL THE WAY TO THE GROUND. Now look at it. They wouldn’t be so bad if they didn’t invade everyone else’s space, generally look shaggy and harbor unbelievably hardy co-parasitic weeds beneath its branches. I’m thinking that only Agent Orange could deal with these rose bushes and their weedy friends.

We have seen the last of the tomatoes, although we continue to get peppers. The baby doll roses are blooming and look better in November than they have all year.

Everything else is winding down and it’s time to haul myself back outside to clean up the vegetable beds, hack down the wisteria and bring in what remains of the herbs for drying.

All-in-all, I can’t say it was a particularly stunning garden year. I traveled for work most of July and August, which meant that the garden was neglected at peak times. The drought also took a significant toll both because the garden didn’t get the best water–rain water–and because what time I did have was spent hand watering.

Nevertheless, we ate very well and I learned more of nature’s lessons. As I retreat back indoors for the winter I’ll be hatching plans for an even more colorful garden next year.