We are not natural carpenters here Chez Bumblebee. So when we set out to build the chicken run for the Palazzo di Pollo (Italian for Chicken Palace), we were making it up as we went along. I provided the genius grand design. Harry provided the muscle and skill with the post hole diggers. We both contributed fingers that were pounded and bruised by the end of our building project.

We are now ready to unveil the Palazzo di Pollo. 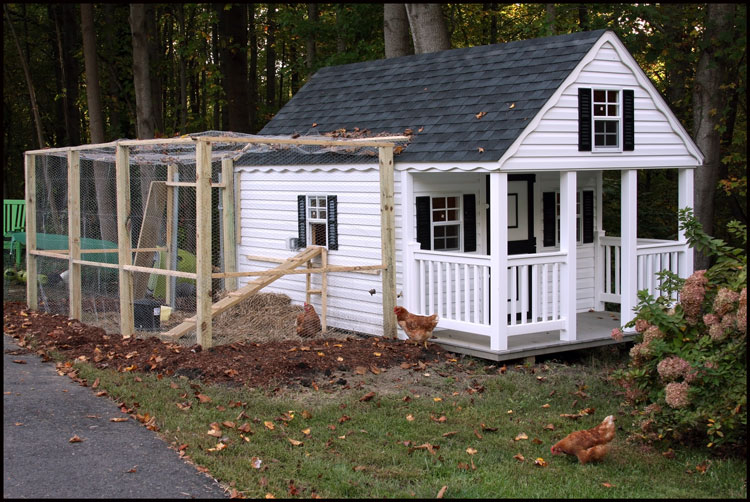 Just to be very clear, and in the interest of full disclosure, we did not build the actual chicken coop. That is a children’s playhouse build by some local Amish craftsmen. We built that ugly, crooked, wacky screened in porch that the chickens access via two little ramps and an open window. And, yes, it took us about three days spread over three weekends to do it.

Chicken wire encloses the whole run. The wire is dug about 12″ into the ground to deter burrowing predators. We have made efforts to put chicken wire over any opening. Of course, the chickens are closed into their Palazzo at night. Except during their free-range time, when we throw caution to the wind for a couple of hours, the girls should be safe.

Throughout the whole building process my son Ben kept asking me, “Do you really think they’re going to go through that little window?”

“Of course! Chickens love ramps, bridges and acrobatics,” I responded, fingers crossed behind my back. “I’ll probably teach them all sorts of tricks before long.”

Despite my enthusiasm, I will say that the chickens are not, uh, well, they’re not very smart. They seem to have to learn to go up, through the window and down the ramp each and every day.

Also, this is only their third day in the Palazzo, but they seem to be indoor chickens. Unless they are free-ranging they seem to prefer the indoor comfort of the Palazzo. I suppose the pine bedding-lined nest box condos, the roosting bars, the 24-hour buffet, three-speed ventilation fan and dual panel heaters and all are just too much to pass up for scratching in a pen.

But if I go outside and call them, they come storming through the window—no doubt looking for the corn treats they get at the end of the day.

Yes, all this for three chickens—so far.

We have two other chickens that have moved to the Eglu. You may remember them—Minnie Ruth and Olive (previously Olivia). Well, today they revealed a huge surprise.

As I was out walking I heard two very distinct “cock-a-doodle-doos!” I may not know a lot about chickens but I know enough to be sure that a hen does not make that kind of noise. That is a very distinctive rooster noise.

As I started thinking about it, we may actually have TWO roosters. They do seem to have been doing a lot of sparring since we moved them into the Eglu on Saturday where I can spend more time observing them.

Only time will tell if they are nice roosters. But one thing is certain, I do not need two roosters to tend to my three hens. One—and maybe both—will need to find a new home.

I did not get pet chickens only to be afraid to walk into the chicken coop. Right now, the chickens let me pick them up and pet them. They may not actively jump into my lap, but they are quite tame and friendly, eating from my hand and following me around.

Well, enough about chickens. With all this activity, I have been giving some thought to what I’ll be writing about this winter when the garden goes a bit quiet. I have some thoughts I will share in the next day or two.

In answer to a couple of emails—YES! We will be getting more chickens in the spring. As a novice, it is one step at a time though.