This may look like just another sunflower photo to you. 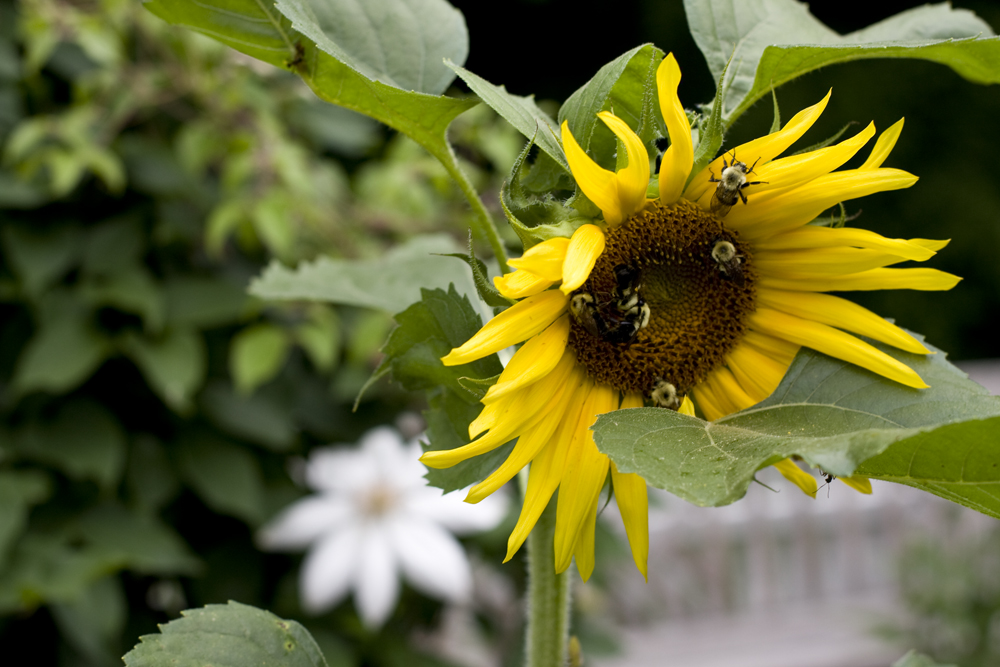 To me though, there are two very interesting things about this image.

First, I didn’t plant this sunflower. I have planted sunflowers, but not this one. The sunflower I planted are ‘Titan’ and they aren’t quite blooming yet. This sunflower was planted by a bird, probably, with seed from the birdfeeders. This would happen quite a lot if I allowed all the little seedlings around the birdfeeders grow instead of mowing them down. It also happened once before in an oddly pretty and serendipidous container arrangement that also included some hearty pansies that over-wintered.

So that’s the first thing I find interesting about this photo.

The second thing is all the bees. Bees are naturally attracted to flowers, so that’s not what I find interesting. What’s interesting, to me, is that there are so many bees. Not just here but all over my yard.

I named my garden Bumblebee Garden when I began gardening here about nine years ago because of all the bees. But in the past couple of years there have been relatively few bees by comparison. There has been the odd and lazy carpenter bee, but not so many other bees. I don’t know why. We don’t spray chemicals on the lawn. The farmer who tends the small hayfield doesn’t spray anything.  I had sort of attributed it to the overall colony collapse disorder I’ve been reading so much about. But really, I don’t know.

But this year, whoa doggie. We have bees! We have little patches of clover in the lawn covered by bees. Bees are all over our flower boxes. Bees are everywhere! They are mostly what I just call bumblebees—fat, slow and lazy little bees that are not aggressive. When I am working near the flowers and the bees, I don’t hesitate to just bump them out of the way if I need to work on one of their flowers. They don’t care.

I love the bees.

So you see, for me, this photo isn’t just a sunflower. It’s a volunteer and an image of the return of the bees.

I rather like this photo for those reasons alone.